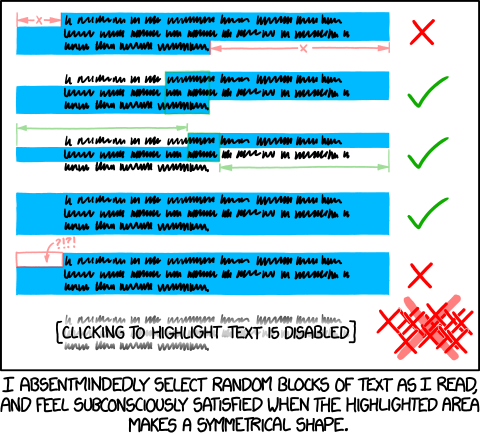 reply
I tend to do this as well...
Colorado Plateau

the highlight of my day
Canada

mrak
I see what you did there

ashtonbt1
reply
Holy carp, I thought I was the only one!

elzapp
reply
The best is still when you highlight text, and the application automatically jumps into edit-mode, loosing the highlight. Yes, JIRA, I'm looking at you!

I know several people with this habit. I've always assumed they do it specifically to drive me bonkers. HOW can you read like that?!?
Boston

RedSonja
YES. My husband does that, and I refuse to try to read anything over his shoulder because of it.

denismm
It gives you a visual mark of where you were last, so your eye doesn't get lost as you scroll.

smadin
I guess I just do that by...knowing where I am in the text? I wonder if there's a correlation between this behavior and moving a finger down the page of a physical book as you read.

denismm
For me it depends on the site design. If it's small text in big blocks I'm more likely to do it, etc.

tdarby
Well, I do it because it helps me read. That it drives other people bonkers is simply an added bonus.

RedSonja
For my husband, it seems to be more of a fidgety thing. I've seen him select different bits of text 3,4,5 times without doing any scrolling. It seems like the mouse user's equivalent of running their thumbnail over the pages of the book you're reading.

rtreborb
reply
Ugh, I hate how Chrome handles this. It does the last one, not #2
San Antonio, TX

JayM
reply
Guilty. Though others reading over my shoulder HATE it!
Atlanta, GA

I know that feel, bro.
on a bike

"And if clicking on any word pops up a site-search for articles about that word, I will close all windows in a panic and never come back."
Melbourne, Australia

Marc Maron is a comedian and the host of my favourite podcast, WTF with Marc Maron, which is a comedy podcast where Maron interviews not only comedians, but musicians, actors, chefs and artists. His conversations are always engaging, funny, raw and honest. I recommend it especially to those who are pursuing a creative field, as most of his interview subjects have insightful and unique stories about how they became successful. (As you can tell from its title, WTF contains explicit language and is for mature listeners … you’ve been warned!)

Maron’s own success story is worth mentioning. In his 40s, having lived a life of anger, resentment, addiction, failed relationships and burnt bridges, Maron had just gotten fired from a radio gig when he started the WTF podcast as a last, desperate attempt to stay in the comedy game. The podcast not only became incredibly successful, leading to a resurgence in his stand-up career and a television series, but it’s also proven to be his salvation.

I can’t believe it’s taken me so long to do a Maron quote, as I must have listened to hundreds of hours of his voice while working on Zen Pencils. This quote is taken from his latest memoir, Attempting Normal.

- Since my last comic about social media, I think it’s fair to say I’m still totally dependent and addicted to my phone. Who checks their phone as soon as they wake up and while still in bed? I do. Who takes their phone into the toilet with them? Me. It’s gross, but I bet you do it too … don’t lie. Who can’t be alone in public without looking at their phone every five minutes? Yep, me again. While I love social media (it has obviously helped Zen Pencils enormously and it’s incredible how easy I can interact with readers from all over the world), we should also remember some of its negative side effects, as this article points out.
- What are your favourite podcasts? Some of my other recommendations: Hardcore History, The Bugle, The Smartest Man in the World, The Nerdist, Stuff You Should Know, StarTalk Radio and The BS Report.

Deadpool vs Blurred Lines [A Robin Thicke's Music Video Parody] by Geeks are Sexy
Tuesday September 3rd, 2013 at 7:01 AM

Deadpool’s gun is bigger than Thicke’s.

Using many control keys during the day, such as Ctrl-f to page down in Vim and Ctrl-c to kill a process in terminal, and assigning some of my own to tmux, I’ve began wondering whether all the letters of the alphabet were accounted for. The answer is: yes, they are; plus even some extra characters.

Most key bindings differ depending on the context, except ones in the “term” column that always keep the same function. The layers that I’m most interested in are:

I have compiled a comprehensive overview of all control key bindings in different contexts and highlighted the features that matter to me the most:

In the shell, these are indispensable:

bash, C-s doesn’t work by default. Here’s how to enable it:

To learn more about navigating tags and jumps in Vim, see Vim: Revisited.

The Middleman will return at last, as a graphic novel by Meredith Woerner
Friday July 12th, 2013 at 8:14 PM

The brilliant but gone-too-soon Middleman series will return yet again.

Have you ever encountered a monolithic Rails app?

Have you ever wondered how to get it back to the slim, flexible dexterity that it had in the early days of its development?

Would you like to know how to make large Rails test suites fast?

I've written a book which tells you how to do those things. But that's not all it does.

I've figured out some amazing hacks to accelerate the process of refactoring. Using these techniques, I shrank a code base by over 1100 lines in a single week.

Nobody's seen this book yet, but people had great things to say about my first one.

I hope it's obvious, but this book is NSFW. Unless your workplace is cool with swearing a lot. In which case, you're golden.
Read the whole story